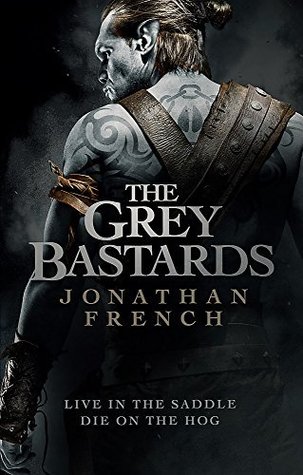 Fast-paced, fun and just a little bit crazy. The Grey Bastards by Jonathan French is a proper fantasy adventure, full to the brim with orcs, magic, halflings, elves and centaurs, all mixed up with plenty of foul language, rebellious spirit and a ton of plot twists. I suppose this is all to be expected when the author says that two of the books biggest inspirations are Middle Earth and Sons of Anarchy.

The story follows Jackal, a member of the Grey Bastards, as he battles to unmask a web of lies and betrayals that have rocked his world, causing him to question much that he once knew about his life and his home. The Bastards are one of several half-orc brotherhoods, or ‘hoofs’, who inhabit the harsh, badlands of the Lot Lands. These separate the human kingdom of Hispartha to the north and the barbarian, orc lands of the south.

The setting was one of my favourite things about this book. The world felt fleshed out with exquisite detail, especially the history and ever-shifting politics of the half-orc hoofs and how they fit into the world around them. One thing that was quite refreshing about the setting was how the emphasise was taken away from the humans. At least to my eyes, the current trend in fantasy is for heavily human-centric worlds, with only a smattering of magic and non-human races, ala Game of Thrones. With The Grey Bastards, French bucks this trend. Humans are present, but they are very much on the periphery and all our scenes are from Jackal’s point of view. I think. If not, then it is at least from a fellow half-orc’s view point. I don’t have anything against human focused fantasy, some of my favourite books are human-centric fantasy, but it was refreshing to see a story focused away from humanity. My only issue with the setting was the lack of a map. I love a map in my books! That is, however, a very minor point and one that makes no difference to the book at all.

Jackal himself is quite a traditional fantasy hero: physically capable, charismatic, reasonably smart and good-looking (for a half-orc, at least). Yes, he is ambitious, a little cocky and makes mistakes, but his motives come from a desire to do the right thing – to protect his friends and to help his hoof. The villains of the piece, however, aren’t so clear cut, and this was one of the best things about the story. You can pick out who the bad guys are, but their motives are understandable. In fact, for some of them, their motives are as pure and good as Jackal’s, it is just their misguided methods that set them out as a villain. Two of the standout characters in the story, for me at least, were Warbler – an old, veteran of the Grey Bastards who has been banished to the life of a free-rider – and Fetch – Jackal’s childhood friend and the only female member of any half-orc hoof in history.

I suppose I should say that I didn’t initially love this book. It didn’t click with me from the first page as some books do, but I soon found myself absorbed. I can’t really say when, but this book dragged me in and never let go. This is helped by an almost relentless pace; the story never lets up on our heroes, dragging them through mountains of action, plot twists and heart-breaking betrayals that will mean you struggle to put it down.

Overall, I would thoroughly recommend this book to just about any fantasy fan. Yes, there is a lot of swearing and references to sex, but if that doesn’t bug you then go pick this book up. You won’t regret it.

7 thoughts on “Book review: The Grey Bastards by Jonathan French”