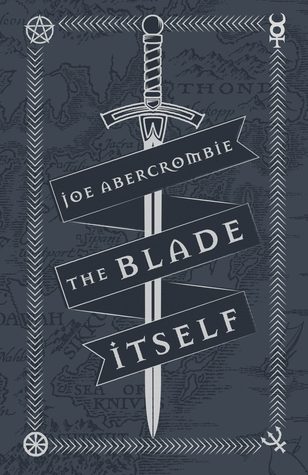 Gritty fantasy is probably the best way to describe The Blade Itself by Joe Abercrombie. Magic is quite minimal, while the action is heart-raising and violent, and the world is full to the brim with morally grey (or worse) characters. In many ways, it feels very reminiscent of the A Song of Ice and Fire series (Game of Thrones) by George R.R. Martin. That being said, it didn’t captivate me straight away. It took a while for me to get into this book, but by the end, I was a fan.

The plot mainly follows three characters as war looms on the horizon. We do get a few POV chapters from others in the book, but we spend the most time in the head of these three. First, we have Logen Ninefingers: a barbarian from the far north of the world with a bloody past and equally bloody reputation. Next, we meet Inquisitor Sand dan Glotka: a once a war hero and darling of the Union, but now a crippled and tortured man full of anger and seething resentment. Last of the three, we meet Captain Jezal dan Luthar: a dashing, young officer with a talent for fencing, who looks set for a bright future. Aside from these three, we get a plethora of side characters. The most important of these being the mysterious Bayaz and his apprentice, Malacus Quai; the wild and vengeful escaped slave, Ferro Maljinn; and humble solider promoted to the lavish and political world of the nobility, Major Collem West.

One of the most impressive things about this book is the way that Abercrombie has given each character a very distinct voice with a slight shift in writing style for each one. My favourite character to read, and the one with possibly the most distinct voice, was Inquisitor Glotka. He isn’t necessarily a ‘likeable’ man; I’d be worried if he was as he hunts down and tortures people for a living, but he is a fascinating character with a very dry wit. His history is tragic and has led him to be incredibly bitter and resentful and full of cynicism. On the flipside, I didn’t really enjoy Captain Luthar’s chapters. I can see where his character arc is going, but I’m just not a fan of him. His behaviour and thoughts don’t feel very consistent to me. Of our third character, Logen, I liked him but didn’t love him. He grew on me and becomes more interesting as the story goes on – much like the book as a whole.

As with all fantasy, the world that the story is set in is as important as the characters. This world is detailed and well thought out, if not hugely original. In fact, I would almost say it embraces the fact that it is full of tropes, and you know what, I liked that. The northern lands were quaisi-vikings, while the Union feels like early modern (say Stuart or Georgian) England without the black powder weapons. To the south we have the Gurkish Empire, which seems, at least at first glance, to be inspired by the Ottoman Empire.  He didn’t try to reinvent the wheel with his world and so I think that gave him plenty of time to focus on writing a very character driven plot.

One major thing to note about the plot of this book is that by the end, nothing seems to have actually been sewn up. This book is very much a set up for the future novels because there was no real pay off for any of the characters here. I found this a little disappointing really, but I also admire How much of an evil genius move it is; I really, really want to pick up the next book and find out what happens to our characters; Logen and Glotka specifically.

Overall, this is a book that I would recommend to fans of grittier and darker fantasy. If you liked Game of Thrones, you will probably like this. Do, however, know that you will be setting yourself up for the rest of the series as there is no real pay off in this one. Oh, and your favourite character will be a bitter cripple who tortures people for a living.

5 thoughts on “Book Review: The Blade Itself by Joe Abercrombie”